Secondly, the definition of healing has been expanded to encompass the expanded thinking that is necessary to understand the principles and concepts within the scope of Esoteric Acupuncture. The definition of healing in Esoteric Acupuncture states: the desire to move from one level of consciousness to a more desirable level of consciousness. This definition includes all the levels of physical disease/pain/depression/emotional and mental challenges and all syndromes and symptoms included in the disease state.

What if an individual has none of those above stated symptoms or syndromes? This new definition of healing is also applicable to those who desire to move into a more refined, higher frequency of the multiple levels of one’s Inner Spiritual Heart and for those who wish to expand one’s consciousness. Two of the methods to expand consciousness is Stillness and to expand one’s vocabulary. Those reading this website are probably more interested in the expansion of the esoteric concepts of the Ageless Wisdom Teachings. Even though there may be newer vocabulary to explain spiritual and metaphysical concepts today, those same concepts and ideas have been here for countless millennia. 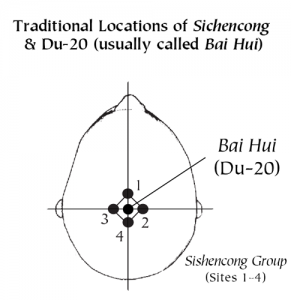 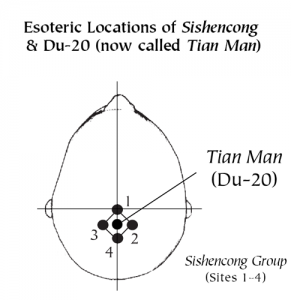 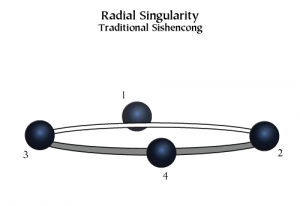 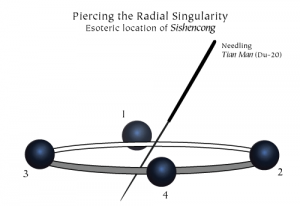 It takes the number 2 to mathematically define a straight line or a curve. The number 2 also moves us into the world of unlimited possibilities: the world of opposites, dualities, yes/no, on/off, plus/minus and the genesis into yin and yang. The number 2 also refers to our sets of esoteric Twin Flames Within and Twin Flames Without. In Esoteric Acupuncture, the lower set of our Twin Flames Within consist of the acupuncture points Mingmen (Du-4), referred to as our Mingmen Fire of the kidney system, in opposition to and simultaneously complimenting and enhancing the flame activated at Shendao (Du-11), the inner flame of our heart system. Here we have the Swadthisthana (second chakra) in sync and vibrating harmoniously with the Anahata (Heart Chakra/fourth chakra). The Higher Twin Flames Within consist of the harmonious connection and communication between the fully opened and activated Jewel in the Lotus of the Anahata (Heart Chakra) and the activated Jewel in the Lotus of the Guru Chakra. (For information on the esoteric definition of Twin Flames Without, please read Discern the Whisper, Esoteric Acupuncture Volume 2.)

The Number 3:
According to D.L. Hotson’s article on Dirac’s Equation and the Sea of Negative Energy,  “Three is the builder. A triangle is the simplest form to enclose space, a stool needs three legs, a universe needs three dimensions. And all stable matter requires just three entitities,”

We mentioned earlier that the number 2 defines a  line or cure. It requires “Threeness” to define a plane. You cannot enclose space with just the number 2. The number 3 explains width, length and height in 3-D space. The number 3 also defines the triangle (See figure E above). You will notice in the needle sequencing of the acupuncture sites the importance of inserting the acupuncture needles in a very specific sequence and in the visual formations of triangles activated by the acupuncture sites. Triangles are also connected to the concept of Shaoyin (kidney system versus the heart system) as used in Esoteric Acupuncture. (See figure F below.)

Remember that the triangle is also a spiral. In a flat two dimensional plane, two points cannot occupy the same space at the same time. (A diagram and explanation will come shortly.)

The “Infinite Possibilities of Fourness” starts with knowing the esoteric meaning of Sishencong and the new location of this grouping of four acupuncture sites. In Esoteric Acupuncture,the Sishencong group (translated as “4 Spirits”)  is always associated with the heart system. The new location sets up the correct field that may possibly allow kundalini and the finer frequency qi to extend into the extra-cranial Sahasrara/Crown Chakra.

In the 3-D world, we may begin discussing fourness by its connectedness with the four corners of a square. Exoterically, four is sometimes used to explain completeness and expansiveness such as in the Piscean sayings: having a “square meal” or going to the 4 corners of the world. In Esoteric Acupuncture, there are sets of groupings of 4 acupuncture sites known as the 4 Window Groups. These include: the Sishencong Window Group, The Karmic Release Window Points and the Siman Fourfold Fullness Window. (For more details of these and other Window Groups, please consult Antahkarana Celestial Fullness, Esoteric Acupuncture Volume 6.)